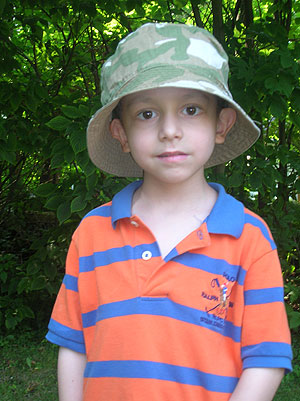 Marco Leggieri is my son…I had the joy and honour of hearing him call me mommy for 5 precious years, and sadly, for the very last time, on his 5th birthday.

At just shy of 3 ½ years of age, Marco was diagnosed with Rhabdomyosarcoma, the most common type of soft tissue cancer in children.

For the next 20 months, throughout chemotherapy, radiation and multiple surgeries, Marco fought with a strength, courage and dignity well beyond his years. Throughout his illness, he tried to be like any other child, playing with his brother, cousins and friends, all while carrying burdens that no child should have to bear. He loved to watch wrestling, play mini sticks and watch silly movies. Marco also had a creative side, and loved to paint, colour, bead and even sing. Marco knew what he liked and he knew what he wanted and with persistence and determination, he went after it…it was always Marco’s Way!!!

No matter how he was feeling or what struggles he had to endure, he always concerned himself with the well-being of those he loved. In his brief time with us here on earth, Marco touched the hearts of all those who met him. All who knew him were inspired by his strength, courage and his determination and were touched by the size of this little boy’s heart.
Every day he brought joy to our lives but tragically, on January 4, 2008 the day he turned 5, he was taken from us as a result of this dreaded disease.

For as long as I live I will never be able to make sense of the loss of my baby. Every year that goes by is a reminder of what might have been, another milestone not reached. The only thing I can do is to honour his name. Had he lived, I know Marco would have done great things because by the age of 5, he already had the makings of a great man. Marco’s passing will not stop him from having an impact. I will continue to work on his behalf, to raise funds so that one day other children will not have to suffer as he did and so that other parents can hold onto the hope of a better outcome in the face of this terrible diagnosis.

The good news is that, with early detection, many cases are treatable. There is, however, still much to learn and more work to be done in order to find improved treatment protocols and ultimately a cure for sarcomas. Research in Rhabdomyosarcoma is underway at the SickKids Hospital, a world class research institute and hospital, with Dr. David Malkin, a world renowned oncologist and scientist, leading this effort.

The funds raised through the ‘Marco’s Way Tribute Fund’ are directed to research and screening technology which will help uncover new protocols to more effectively deal with this specific type of soft-tissue tumour. To date, over $470,000 has been raised. Every dollar you donate brings us one step closer. The time is now…dollar by dollar, punch by punch, let’s knock childhood cancer out!

All personal/individual donations made to the fund (Tribute Fund Number T8204) are tax deductible and tax receipts will be issued.

With sincere thanks for your contribution to our cause,